I didn’t run during National Running Day. I didn’t run all week. Unfortunately, I was battling a stomach bug or some adverse reaction to something I ate Monday night. Thankfully, I was feeling much better by Friday so I was able celebrate National Doughnut Day…

Saturday morning I was up early for a  No Meat Athlete OC Running Group run at the Bolsa Chica Wetlands. Our FB group probably has about 50 members but I’ve only run with a handful of them. It was nice to connect with more vegan/vegetarian runners. Mike and Sloan had a 12 mile run planned with bail out points along the way. I ran the entire 12 miles, learning a lot from these masters runners along the way.

After the run, I made my way across the street to Secret Spot for brunch. I went for the Vegan Breakfast Scramble, hold the tortilla chips.

Took the long way home and stopped for some treats at Sensitive Sweets.

The rest of the day was spent cleaning the house… we’ve been pretty domestically challenged at home lately and I’m trying to avoid being on the next episode of Hoarders: Buried Alive. Lol.

Having a super clean kitchen inspired me to go the extra mile at dinner.

Sunday morning, I decided to get up before church and fit a few more miles in. The first couple of miles were a struggle… my Achilles tendons on both legs were tight. They eventually loosened up.

Maybe I ate too much, maybe it was all of the miles I put in, but I was exhausted when I got home. I laid down  for a quick power nap but ended up waking up three hours later! No regrets, though, because it was glorious! Gotta love being on summer vacation!

Since it was close to dinner time, I got started on brinner. 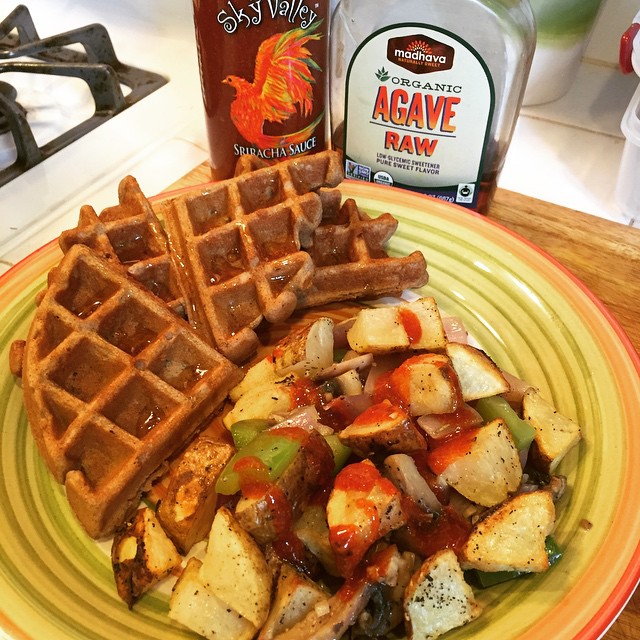 My second weekend of summer vacation did not disappoint. As long as all of my weekends are filled with miles and meals, I’ll be happy. Simple pleasures, right?

How was your weekend?