Greetings from Phoenix!  This week I am attending the Science Olympiad Summer Institute, a conference for educators involved in Science Olympiad.  My family decided to tag along, too.

Monday, we hit the road much later than I had planned to.  Registration was at 4pm and a storm was supposed to hit Phoenix in the late afternoon, so I wanted to head out no later than 9am.  Unfortunately, we didn’t end up leaving SoCal until 11 am.  Although I was a little stressed at first, I felt better once we were on the road for a while.

We made a couple of stops along the way to stretch and eat. 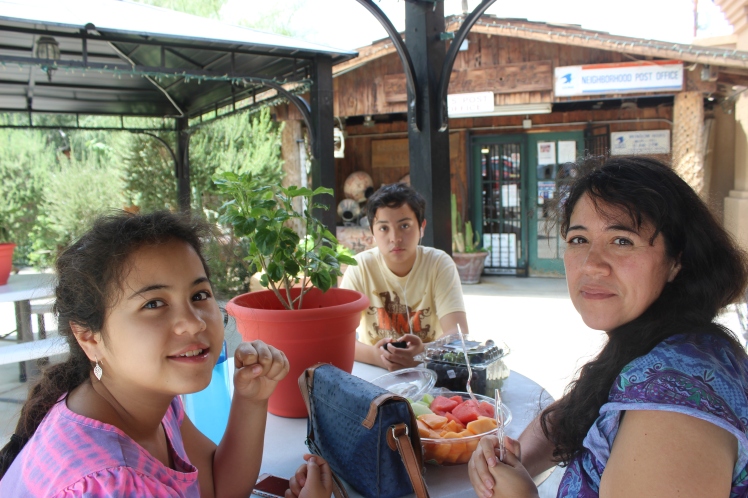 As 4 pm came and gone, I realized that I was going to miss registration and probably arrive about halfway into the opening dinner/reception.  We decided to stop and eat dinner as a family, since their meals aren’t covered by the cost of the conference.

Thankfully, we arrived at the resort without having to deal with rain along the way.  But wouldn’t you know it, as soon as we were given our room keys and it was time to unload the car, the anticipated monsoon hit!

We were totally drenched by the time we finished unloading the car.  But we were glad to be safe and dry inside our room.  At that point, I had 10 minutes to get change into dry clothes before the start of the first session at 7pm.

I got checked in and all was good.

It stopped raining later that evening and we had enough time to drive down to the grocery store to pick up some food for the next few days.  We were pleased to find gluten free snacks as well as fruit to take back to our room.

We all slept good that night. 🙂

What types of trips did you/do you take with your family?